over the quarry royalty payment to the two Provincial Government of Shefa and Sanma province. The Acting Prime Minister, Hon. Sato Kilman, conveyed the Government of Vanuatu’s words of appreciation
to the Government of US through MCC for the MCA-V Project in successfully achieving the accomplishment of the quarry payments.
The ceremony was held at the Shefa Provincial Council Chamber and was witnessed by Minister of
Finance and Economic Management, Hon. Sela Molisa, Minister of Lands, Hon. Paul Telukluk and Deputy Prime Minister Sato Kilman, two province president, MCC country director, MCA Director, and other Government officials.Read more about the Report
The Acting Prime Minister acknowledge that the MCA project helps to give opportunities to the people of Vanuatu in terms of Labour, Hiring of equipments and royalty payment of quarry. The two islands that benefited from the Infrastructure project were Santo and Efate. He further added that “in Efate there is tremendous impact on the easiness of travelling between rural and urban for selling of goods to the market and various businesses in Port Vila. Unlike the past, we got lots of pot holes”
At the handing over of the royalty payment, the Acting Prime Minister handed over the royalty payment to the president of Shefa Province, Lami Sope, an amount of 28, 160, 166 vatu. Follow on the president of Sanma receives an amount of 10, 292, 842 vatu. 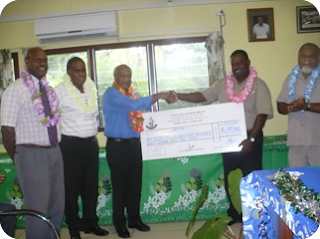 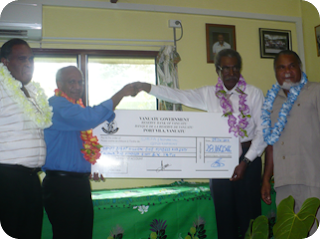 The Acting PM made an appeal to the Minister of Finance and the provincial government to assist in ensuring thatcustom land owners of the quarries receives their entitlements. He was impressed by the two province efforts to facilitate the process so far in ensuring that custom land owners allow their land for the quarries.
He said “ we should comment the two province that yes there’s problem but we still proceed. The money is small, and since we have the road, we should re-invest again on other development to compliment the road”.
He made an urgent call “ at this point of time” to relevant Government ministries and the two province to take crucial steps to qualify for the second compact. With the progress and successful disbursement of the royalty payment he congratulated MCC and Shefa and Sanma Provinces for their royalty payments and urge them to
invest their share in developments to facilitate economic growth for their people. 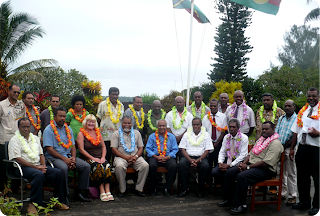 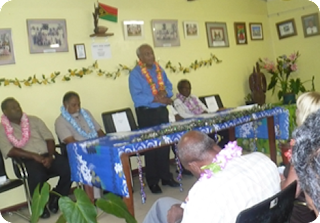