Santo Work
Very good progress is being made with sealing on Santo and the sealing crew have now progressed through Hog Harbour and reached the Blue Hole at the 50 km mark. It is anticipated that the seal will reach Port Olry this weekend. This new seal is being completed to the full 6 m width. Once the sealing crew have reached Port Olry they will return to the start of the Project length and widen the previously completed seal from 5 m to 6 m. 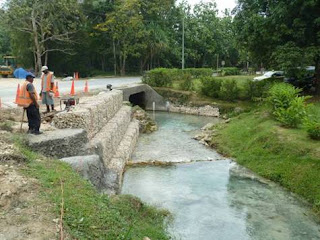 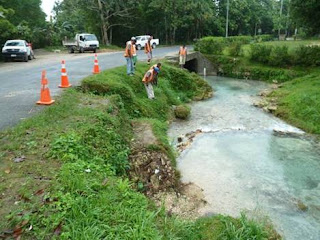 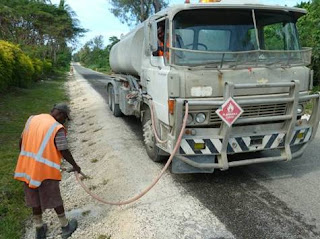 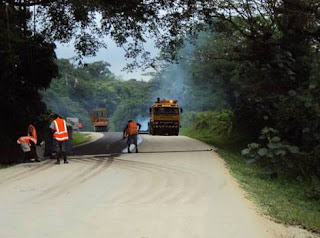 Efate Work
While awaiting the return of the sealing crew from Santo so that final section of second coat seal between Eton and Rentabao can be completed the construction crews on Efate have been undertaking a series of minor jobs necessary to achieve Project completion. These include entrance construction, quarry rehabilitation and the installation of gabion baskets to protect the road formation near the Mele Cascades.
The planting crew from Eton Village are making good progress with establishing grass in the table drains near the village and will shortly relocate to the La Cressonniere area.
A start will be made on the installation of a two cell box culvert at Dry Creek in late September.
Posted by Millennium Challenge Account-Vanuatu at 3:02 PM 0 comments

Widening the Sealing of the Santo East Coast Road

Widening the Sealing of the Santo East Coast Road: Deepening the Vanuatu , United Sates of America and New Zealand Partnership

The Minister for Finance and Economic Management Sela Molisa, the Minister for Infrastructure and Public Utilities Serge Vohor, the U.S Ambassador to Vanuatu Teddy Taylor and the NZ Minister for Foreign Affairs Murray McMully, today announced plans to widen the upgraded Santo East Coast Road from 5 Meters to 6 meters, consistent with the seal width on the Efate Ring Road. This work, at an additional cost of US$648,575 has been achieved through collaboration, goodwill and good management.

The Hon. Sela Molisa opened today’s media conference “ We are pleased to announce that the prayers of the people of Santo have been answered. The whole of the 57 km seal on the Santo East Coast road will be widened from 5 meters to 6 meters. This is a great 30th Independence Anniversary gift for the people of SANMA Province” he stated.

The road projects, part of a five year US$65.69 million Vanuatu Millennium Challenge compact are bolstering the country’s transportation infrastructure by upgrading the Efate Ring Road and the Santo East Coast road. The overall objective is to reduce poverty and increase incomes by stimulating economic activity through these roads improvements. The Compact also aims to strengthen the ability of the Government including the Public Works Department to maintain and sustain infrastructure assets.
Initially, challenges such as a rise in cost of construction downscaled plans to complete both roads. Last year, the New Zealand Government, working in collaboration with the MCA-Vanuatu and the Government of Vanuatu, offered to provide additional funds of NZ$14million.

To avoid cost overruns, the seal on the Santo road was first restricted to only 5 meter width. MCA-Vanuatu and the design and build contractors, Downer EDI Works , worked to drive maximum value from the available funds and make savings in the hope that the Santo road seal width could be considered. The people of Santo have supported the road-works and have continued to pray that funds would be found for the sealing widening.
The Ministry of Infrastructure and Public Utilities, the Hon. Serge Vohor, acknowledged the efforts of his Ministry’s team on Santo and the contribution by the Public Works Department and the SANMA Provincial Government of a stockpile of some 200 cubic meters of 5mm aggregate. This contribution helped to significantly reduce the cost of the seal widening.
The NZ Minister of Foreign Affairs, the Hon. Murrray Mc Cully paid tribute to the efforts of Downer EDI Works in its work to ensure that the road are completed on time and within budget. “I am pleased to learn of the positive impacts the roads are having on the movement of people and goods”. He also welcomed the Government of Vanuatu’s Commitment to protecting this investment by ensuring the roads are maintained to a high standard.

Ambassador Teddy Taylor praised the Prime Minister and his Senior Ministers for their whole of Governments commitment and leadership of the Compact and the solid management by the MCA-Vanuatu Steering Committee and Unit. “Vanuatu continues to be a role model for the South Pacific”, he said. “ The impact of this small compact has been huge, from life-saving access to health services, reduced costs in accessing education, better access to market, end impetus to new business development”

In concluding the event, Minister Molisa stated “The MCA-Vanuatu Compact is achieving more than just building the roads. It is strengthening partnerships between communities and Provincial and National Government, and consolidation friendships with the people of the United States of America and New Zealand. By working together, we will be able to widen the seal and provide safer and more sustainable road for Santo”

MCA-Vanuatu has advised that the road-works on both Efate and Santo, including the extended seal on Santo, are expected to be certified for takeover in October 2010, ahead of schedule. It is expected that the celebrations to mark the completion of the road program will held late January/ early February, with the Vanuatu Compact Completing in April 2011.
Posted by Millennium Challenge Account-Vanuatu at 2:43 PM 0 comments

•civil works for the reconstruction of priority transport infrastructure on eight islands, covering roads, wharfs, airstrips, and warehouse; and
•institutional strengthening efforts in Vanuatu's Public Works Department, including the provision of plant and equipment for maintenance to facilitate the sustainability and maintenance of infrastructure assets.
However due to various unforeseen economic circumstances the scope of work has been reduces to funding only two road projects on the two main islands namely; Efate and Santo. There is also a reduction is the scope of the institutional strengthening component of the program.
Posted by Millennium Challenge Account-Vanuatu at 3:36 PM 0 comments

Email ThisBlogThis!Share to TwitterShare to FacebookShare to Pinterest
The Government of the Republic of Vanuatu has received a grant from the Government of the United States of America through the Millennium Challenge Corporation (MCC) to support a five-year Program of investments in the Transport Sector, aimed at facilitating poverty reduction through economic growth. Vanuatu is now in the implementation phase of the program. The Program was developed by the country through a consultative process, is designed to reduce poverty through infrastructure development to enable farmers in rural areas to get their produce to the markets and to foster development of the tourism industry.
The Government of Vanuatu has established MCA-Vanuatu as an independent Unit within the Ministry of Finance and Economic Management to be the legal entity responsible for the oversight and management of the implementation of the Compact. The MCA-Vanuatu Steering Committee and Management Unit have principal responsibility for thverall management of the implementation of the Program in a timely, effective, efficient and results-oriented manner in accordance with the terms of the Compact and relevant Supplemental Agreements.
Originally Vanuatu’s MCA Program (“Program”) consisted of two principal project activities: (i) civil works for the reconstruction or construction of priority infrastructure on eight islands, covering roads, wharfs, airstrips and warehouses (the “Infrastructure Activity”); and (ii) institutional strengthening efforts in the Public Works Department (“PWD”), including the provision of plant and equipment for maintenance of the infrastructure (the “Institutional Strengthening Activity”). However due to various unforeseen economic circumstances the scope of work has been reduced to funding only two road projects on two islands with a reduce scope of institutional strengthening.